Dr Wendell Rosevear, OAM, is a Fellow of the Royal Australian College of GPs who works tirelessly in the areas of Gay & Lesbian health, having co-founded the Gladstone Road and Stonewall Medical Centres in Brisbane.  He founded GLADS (Gay & Lesbian Alcohol & Drug recovery group) in 1991, and MARS (Men Affected by Rape & Sexual Abuse) in 1993.  Dr Rosevear has worked in prisons for many years, cares for people with HIV/AIDS and is active in suicide prevention.
Recognised in the annual SameSame list of the 25 Most Influential Gay and Lesbian Australians, among his many awards and honours is the 1996 Brisbane Australia Day Citizen of the Year, a 2001 'Local Hero' award, and the Order of Australia Medal in 1998.  His community spirit has earned him the nickname 'Nelson Wendella' among his colleagues.
Known for his counselling work in prisons, he lobbies nationally to generate insight and compassionate understanding about drug addiction and recovery, sexual assault and suicide prevention.  His personal life motto is 'Make love infectious' and his chapter in SPEAK NOW is titled 'Love is not a threat'.

We asked Dr Rosevear to respond to the controversy aroused by the publication of SPEAK NOW,  in particular the criticism that it doesn't speak with one voice on the issue of marriage and that politicians could be 'spooked' by the proposal of polyamory expressed by some of the contributors...


Your aim in producing the book is to foster a dialogue or conversation, so thanks.  Of course that means there will be as many opinions as participants.  Resolution doesn't come from sameness or conformity, it comes from acceptance and respect for honesty and choice.  If we seek to not have a discussion because we don't or won't agree, then we miss out on the development of understanding and empathy that comes from interaction.  If we deny one person a voice because it isn't politically expedient, we are missing the point that safety comes from valuing each person and each perspective.
I think one of the book’s strengths is that it welcomes diversity of opinion and that gives it real credibility.  Not everyone in the gay community wants marriage, and some are opposed to it.  Really we need to foster respect for choice and we can't ask for more than that.  I work in sexual assault recovery and I am so aware that when you have a choice, you feel valued and when you have it taken away or denied, you feel devalued.  We are simply asking for choice to affirm the value of all Australians... to help make Australia safe.  I have seen at least seven homophobic murders in Queensland and homophobia is a toxic poison Australia can’t afford to sustain.


Some want to foster ongoing prejudice, by raising the issue of polyamory.  However, polyamory is a reality in the heterosexual and gay world (and certainly part of the Muslim world).  We don't deal best with reality by denying it.  As we have learned, messages about safe sex for HIV and other STD prevention are best sent when we can be honest about practice and risk, not just about some myth that people are monogamous, in or out of marriage.  Everyone is valuable, no matter who they choose to love and, as I wrote in my piece for SPEAK NOW,  'Love is not a Threat, Hate is'.


I also said Christians need to understand that civil government needs to stand up for civil rights, so that if they were to become a minority, their rights could be protected also.  This issue is not about whose moral or political opinion about marriage is right, it is about valuing people and respecting their choices, which is really the foundation of morality anyway.
I think it would be good to send a copy to Julia Gillard, as she needs to process the issues to free her thinking.  In no way does the book say one way is 'right'.  I don't let fear run my life, I am an advocate of love; it beats fear.  Just let there be honest voices heard to effect the change that comes from the power of people's voices.  .....make Love infectious. 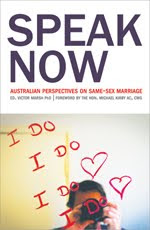